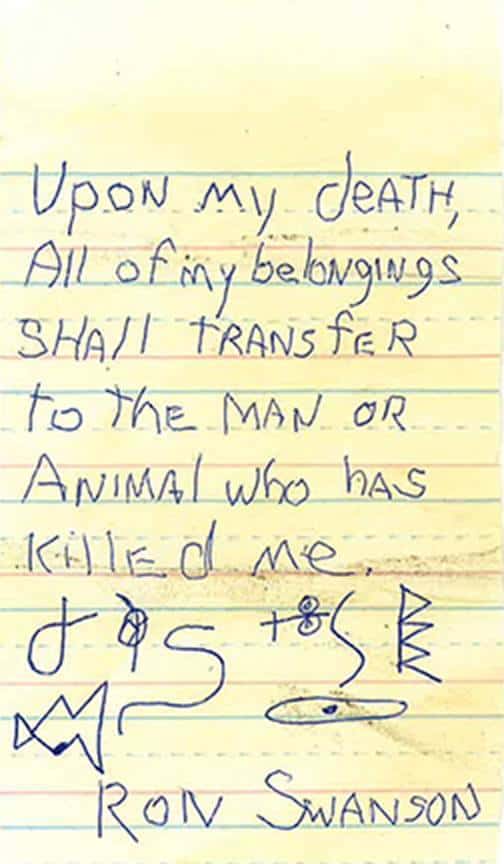 Analysis of Ron Swanson’s Last Will and Testament

Analysis of Ron Swanson’s Last Will and Testament

In Episode 5 of Season 6 of the TV show Parks and Recreation, Ron Swanson (played by actor Nick Offerman) showed his Last Will and Testament to Ben Wyatt (played by actor Adam Scott). Ben asked Ron if he would be a witness to his Will and Ron responded by showing him his own Will which he wrote at age eight and keeps in his wallet:

Ron: I’ve had the same Will since I was eight years old. (hands Ben his Will)
Ben: (reading Ron’s Will) Upon my death all of my belongings shall transfer to the man or animal who has killed me.
Ben: What are these weird symbols?
Ron: The man who kills me will know.

Below is an analysis of Ron’s Will under the laws of Oregon, even though he likely signed it in the state of Indiana. (this is a fun exercise, so let’s suspend reality, if any exists at all).

Would Ron Swanson’s Will be legally recognized in the State of Oregon?

Ron Swanson wrote his Will by hand, in ink, in its entirety. No witnesses signed his Will. A purely handwritten Will signed by the testator with no witnesses present is referred to as a holographic Will. Ron’s holographic Will also contains symbols in a language other than English.

Oregon recognizes handwritten Wills, but not holographic Wills unless the Will was validly executed in another state.

Huh?! That certainly is a confusing statement so let’s break it down:

However, there may be a saving grace. According to ORS 112.255, in Oregon a Will that has been properly executed in a different state is still valid, including holographic Wills, so long as the other state allows for holographic Wills. Ron did not execute the Will while he was living in Oregon! (He grew up in the State of Indiana where, at the age of nine, he got a job at a sheet metal factory). So, it is very likely Ron executed his Will in Indiana. If Indiana allows for holographic Wills his Will would be recognized as legally valid in the State of Oregon.

Sadly, it seems that Indiana does not accept holographic Wills.

Was Ron Swanson too young to have a Will?

Ron got his first job at age nine, and at age eleven, was working two jobs. He was a man ahead of his time, both figuratively and otherwise.

In spite of that, he was still too young to execute a Will.

Ron wrote and signed his Will when he was eight years old. In Oregon, a person can execute a Will only when they are eighteen years old, or older. (ORS 112.225)

Yes, but let’s say that for argument’s sake, Ron Swanson’s Will is valid. Can we all have a Will that is as simple as his? Isn’t his Will creative and ultimately legally effective?

Many states, including Oregon, have enacted laws to ensure that a killer does not benefit from the death of their victim. These laws are often referred to as slayer statutes. In Oregon, the statutes are found in Chapter 112 of the Oregon Revised Statutes ranging from ORS 112.455 to 112.555. When the homicide is a felony, conclusively determined by the final judgment of a criminal conviction, Oregon’s slayer statute applies. (ORS 112.555) What that means is Ron’s killer could not legally receive all of his belongings as his Will dictates.

…. unless the slayer is an animal

Ron’s Will could still have legal effect if an animal, not a human, killed him. A “slayer” is defined as “a person who, with felonious intent, takes or procures the taking of the life of a decedent.” (ORS 112.455(3)). An animal is not a person, therefore, the animal would not be barred from taking Ron’s assets upon his death even if the animal caused his death.

But animals are not people so they cannot inherit property, right?!

Not in Oregon… pets can benefit from the assets of someone who has died. In the State of Oregon, a trust can be created in a Will (or another Trust) to provide for the care of one or more animals.  (ORS 130.185)

Posted on February 12th, 2020 by Collier Law
Analysis of Ron Swanson’s Last Will and Testament