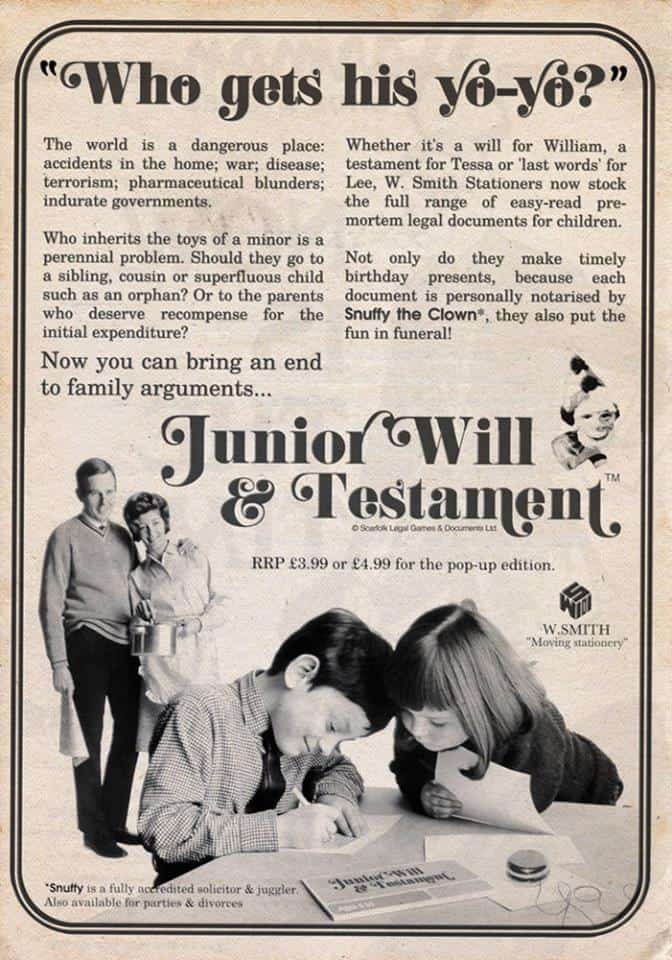 Wills for Kids and Other Legal Formalities

Wills for Kids and Other Legal Formalities

You may have seen the humorous Scarfolk blog that discusses the “Junior Last Will & Testament”, an easy to read pre-mortem legal document for children.

As quoted from the Scarfolk humour blog:
“While it familiarised children with the inevitability of their demises in a fun way, it also introduced them to their civic obligations. For example, many children were not aware that, like adults, they were subject to death duty.”
(Art and text from: Junior Will and Testament – 8 August 2014 by Richard Littler).

Scarfolk is a fictitious town in North West England created by Richard Littler for fun and entertainment. This humor is dark and macabre, but any humor helps us by making it easier to discuss death and dying.

How old do you need to be to have your own Will?

In the State of Oregon, a person must be at least eighteen years old in order to make a Last Will and Testament, more commonly referred to as a Will. (ORS 112.225 “Who may make a will”). So, children are not able to execute a legally valid Will in Oregon. However, the statute provides a small exception to this rule. ORS 112.225 says, “Any person who is 18 years of age or older or who has been lawfully married or who has been emancipated in accordance with ORS 419B.550 to 419B.558, and who is of sound mind, may make a will.” (emphasis mine). If you are married, divorced, or widowed before the age of eighteen, you are allowed the opportunity to execute a Will. (see this article published by the Oregon State Bar regarding marriage in Oregon)

Does that mean anyone over that age can make a Will?

The age requirement is not the only requirement that must be met. The person who makes a will, sometimes called a testator or testatrix, must also be “of sound mind.” The requirement of having a “sound mind” is referenced in other Oregon state laws as a requirement for executing an Advance Directive, a document directing the Disposition of Remains, and more. In order to have a “sound mind,” a person must have the mental capacity to understand the document and what it is meant to achieve. An attorney will determine this mental capacity by asking the testator/testatrix a series of questions to which the attorney must receive satisfactory answers.

Who is in charge of the child?

Before someone turns eighteen, they are not an adult who has “reached the age of majority.” Some terms that we use to refer to someone a person under the age of 18 include: minor, juvenile, teenager, child. The age of majority is the age when a person transforms into a legal adult. [note: the age of majority may be different in your state – we’re looking at you, Alabama and Nebraska…] Until a child reaches the age of majority, his or her parents are in charge. According to the US Supreme Court, a parent’s liberty to control the upbringing and education of their children is a fundamental right. (see e.g. Stanley v. Illinois, 405 U.S. 645, 651, 92 S.Ct. 1208, 31 L.Ed.2d 551 (1972); Santosky v. Kramer, 455 U.S. 745, 753, 102 S.Ct. 1388, 71 L.Ed.2d 599 (1982)). And as stated in the US Supreme Court case Troxel v. Granville, “it cannot now be doubted that the Due Process Clause of the Fourteenth Amendment protects the fundamental right of parents to make decisions concerning the care, custody, and control of their children.” (Troxel v. Granville, 530 U.S. 57, (2000)).

If a parent has control over their children, can they execute a Will on behalf of their child?

It is possible for someone to sign a Will on behalf of another person, maybe even a child, but, in that case, the validity of that Will is in serious doubt for various reasons. First, the age requirement described above must still be met, and that requirement is not met for a testator under eighteen years old. Second, a testator must presently intend for the Will to dispose of their property at death. Even though a child may agree with the Will’s provisions, they may not understand the true effect of the legal document and, therefore, may be unable to prove he or she had the necessary intent or a “sound mind”. Third, only the testator can direct someone else to sign for him or her, so if a child asks his or her parent to sign a Will on his or her behalf, and the child is not an adult capable of making legal decisions, his or her instructions to his or her parent may be seen as having no legal basis. Fourth, there is the question of how much undue influence was used to coerce the child into making the Will. A parent has a strong relationship with the child, which is one of the factors that is attributed to evidence of undue influence.
Some of these limitations described above also apply to an adult whose Will is signed or created by someone else.

Overall, this is a somewhat silly exercise. Children are not adults, so their need for a Will is not something often considered – hence the wonderfully absurd and comical “Junior Will and Testament” humor mentioned at the beginning of this post. But, this strange idea does give us a good excuse to review some of the important questions regarding Wills executed in Oregon.

Posted on February 11th, 2020 by Collier Law
Wills for Kids and Other Legal Formalities